My name is Julie Egon and I did this 4-month internship as part of my first year of master in Ecology and Sustainable Development at the Catholic University of the West in Angers, France. This internship was carried out within the Department of Ecosystem Biology of the University of Southern Bohemia under the supervision of Julien Mocq, post-doctoral researcher at the University of Southern Bohemia and Patrick Gillet, a professor at the Catholic University of the west, in Angers. On a personal level, I derive from this course many benefits and enriching experiences. This internship allowed me to better understand this environment and to acquire a particular rigor in my work. This was also an opportunity for me to deepen my knowledge of ecology and entomology, two subjects that are close to my heart.

IntraGuild Predation (IGP) is an interaction in which a predator, called the top (IG predator), can consume another predator (IG prey), both sharing a common resource called extraguild prey (Polis and McCormick, 1987). It is very common in natural environment and it may have an important impact on the structure of the communities. Some abiotic and biotic variables influence the intensity of intraguild predation, such as extraguild prey density: if this density is high, competition between predators will tend to be low and there will be little IGP (Lucas et al., 1998).

The predation success of an individual can also be negatively affected by the presence of conspecifics, through competition and mutual interference. Mutual interference is a reciprocal interaction between individuals of the same species that reduces their individual consumption rate (Delong and Vasseur, 2011), the presence of other individuals increasing competition and the risk of intraspecific attacks, and thus of hinders the attack of prey (Mansour and Lipcius, 1991).

Moreover, an intermediate predator, in addition to being hindered by its conspecifics, must deal with the risk of being consumed by the top predator and must therefore be able to detect it. This perception can be done in different ways such as vision, or the detection of chemical signals emitted by the predator.

The present study proposes to provide information on the influence of various biotic factors, such as mutual interference or the presence of predator cues, on the effectiveness of predation in an intraguild predation system through experimentation of the predation of Chaoborus obscuripes on Daphnia magna.

We studied an intraguild predation system using Aeshna cyanea as top predator, Chaoborus obscuripes as an intraguild prey (Intermediate predator), and Daphnia magna as an extraguild / resource prey (Fig. 1).
The different species used are collected from wetlands in the vicinity of the city of České Budějovice (Czech Republic). The organisms are then acclimated to laboratory conditions for 3 days before being used in experiments. The chemical secretions of the Aeschna are recovered by collecting daily 150 ml of their livestock water for use in experiments within 24 hours.

The aim of this experiment is to test different factors in order to show their influences on the functioning of intraguild predation. Thus, we have selected and varied 3 parameters that are:

For reasons of time limitations, if the chemical signals were tested for all prey and predator densities, only the extreme conditions (0, 1 and 8 predators, 12 and 192 prey) were tested for the visual cues alone, and for the combination of the two signals.

The arenas consist of a plastic box (190x135x93 mm) filled with 1.4 liters of water and presenting a thin layer of sand as a substrate. A sealed and transparent plastic box is placed on the upper part of the arena in which an Aeshna will be placed if the visual signal is tested. When required, 280ml of water containing chemical secretions is diluted in the water of the experimental arena, representing 20% of the total volume. The daphnids are released into the water, followed 30 minutes later by the Chaoborus at the density tested. Control replicates without Chaoborus are carried out to control the background mortality of Daphnia.
The arenas thus prepared are then separated by cardboard partitions so as to avoid visual interference between arenas.
During the experiments, the arenas are replaced in the air-conditioned chamber at 20°C, with constant light, for 6 hours.
At the end of the experiment, the water of the arenas is filtered in order to recover the daphnia and the Chaoborus. The Daphnia are counted in order to determine the number of living or dead individuals and to deduce the total and per capita number of daphnia consumed by Chaoborus. Finally, the arenas and the sand are cleaned with boiling water to avoid the presence of chemical information between experiments.
•    Statistical analysis
A Generalized Linear Model (GLM) was used to model the influences of a set of explanatory variables on a dependent variable. 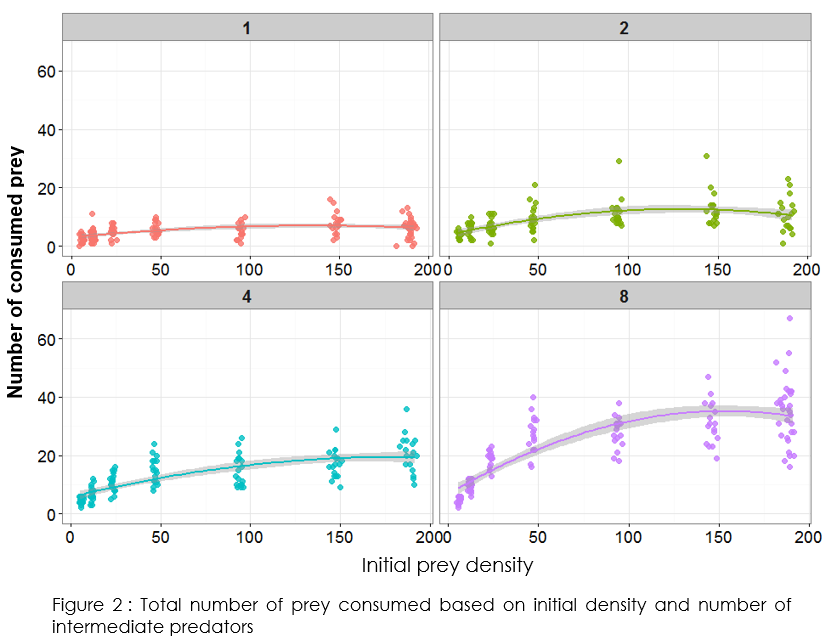 The total proportion of daphnia consumed (Figure 3) decreases as the initial density increases until it stabilizes. For example, for a density of 4 Chaoborus, a proportion of about 0.75 daphnia will be consumed for a density of 6 daphnia, then this proportion will increase to 0.25 for 48 Daphnia and will stabilize around 0.10 from 150 daphnia.
For densities of prey less than 48 daphnia, the Chaoborus consume more daphnia when few of their conspecifics are present (Figure 4). In this way, a single Chaoborus consumes a larger quantity of daphnia than if it is accompanied by 3 or 7 other Chaoborus. This phenomenon tends to diminish with the increase in prey density.

The fittest GLM of daphnia consumption conserved as significant variables only the number of predators, the number of preys and their interaction, eliminating the chemical and visual signals (GLM 2), seeming to show a lack of significant influence of these signals in the predation success.

In this study, we focused on three factors that may influence intraguild predation relationships: the chemical and / or visual presence of a top predator, mutual interference, and extraguild prey density on predation behavior of an intermediate predator.

Our results show that mutual interference has an influence on Chaoborus predation at low densities. Indeed, when few prey are present, the presence of other individuals induces a stronger competition and also constituted a discomfort. Prey will be more difficult to encounter and may be intercepted by competitors. The mutual interference then decreases as the density of prey increases, making them more available for each predator present and decreasing the stress induced by the presence of other individuals.

Looking at the detection of the presence of a top predator, our hypothesis was that Chaoborus would detect the presence of predators and reduce their feeding activity in the presence of a visual or chemical index. Neither the chemical signals nor the visual signals from Aeschna had any significant influence on the predation rate of Chaoborus on the daphnids. The absence of influence may be due to experimental conditions which do not allow the Chaoborus to perceive the Aeschna. Positioning above the arena or the walls of the box could affect visual perception. Concerning the chemical signals, it is possible that the intermediate predator can perceive these signals or that it perceives them but that this does simply not affect his diet.
On the other hand, the absence of detection of chemical signals from predators may in part result from the natural living environment of the organisms used here, namely, stagnant pond of water of small scale: if the chemical signals have a sufficiently long life and in the absence of water circulation, the medium could be saturated with these signals, rendering them unusable in a predator detection strategy.

The aim of this course was to try to answer some remaining questions about biotic factors influencing intraguild predation.
Our results did not demonstrate a significant influence of the visual and chemical presence of the higher predator Aeshna cyanea on the predation of the intermediate predator Chaoborus obscuripes. Then, an increasing density of prey resources increases predator consumption, up to a threshold representing the maximum of assimilable prey for a defined duration. Finally, mutual interference disrupts the feeding of Chaoborus, which reduces its consumption in the presence of other individuals of its species.
Knowledge of the mechanisms governing intraguild predation can have many applications and needs to be further developed. In biological control, better knowledge of intraguild predation may help to protect crops (Gagnon, 2010), by avoiding, for example, intraguild predation among crop pest control agents. It also has a role to play in species conservation, as well as improving the modeling of ecosystems and food webs.